Warning: "continue" targeting switch is equivalent to "break". Did you mean to use "continue 2"? in /home/uplandslabour/KVLZJ303/htdocs/wp-content/themes/Divi/includes/builder/functions.php on line 4831
 Coming Soon: “Living Streets”, Uplands! | Uplands Labour 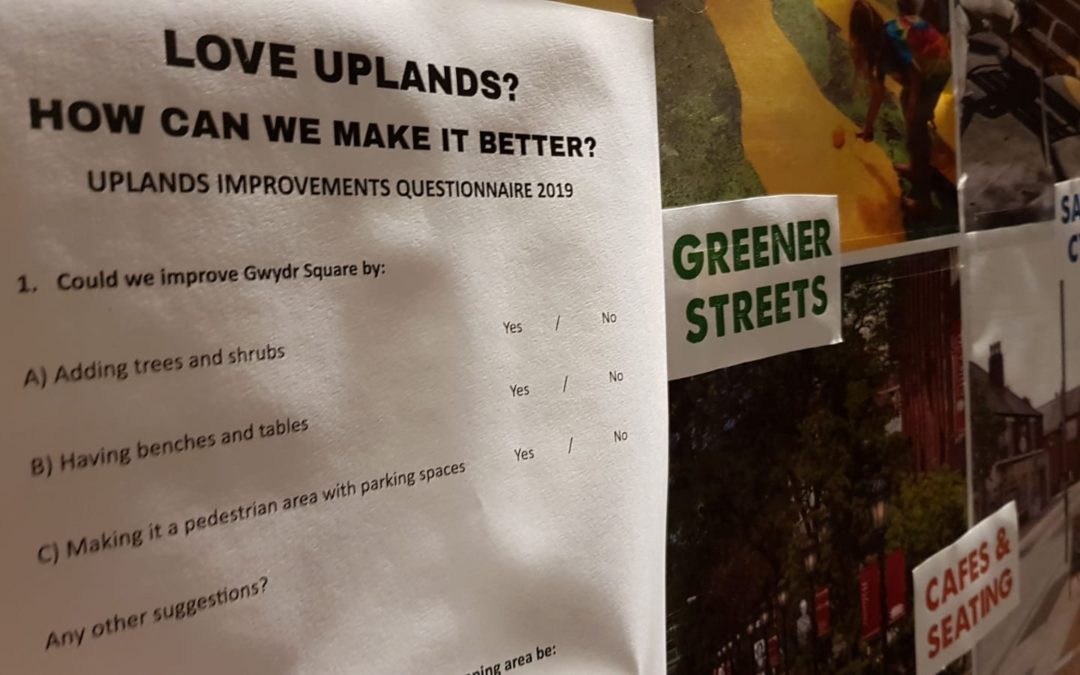 “I’d love to see Gwydr Square in Uplands (where the Uplands Market takes place) turned into a pedestrian, no-traffic zone”, said an email I received from a resident in February this year, who had originally contacted me about general traffic concerns. If I had £1 for every time someone has said that to me, I’d be able to afford a round in Noah’s Yard…

Another person who said it, probably about a year ago, was Jane Tonks. I knew Jane from our time together working in Swansea Council, where she was part of the team that got Local Area Co-ordination off the ground. After retiring she began talking with me and other neighbours about her interests in public transport, co-production and ways communities could work together to improve their neighbourhoods.

As a Trustee of Bikeability, Jane already knew local members of the cycling charity Wheelrights. And having attended some events by 4theRegion, she also knew that one of its founders, Dawn Lyle (also our wonderful Uplands Labour branch chairperson) loves encouraging people to share innovative ideas and pool their knowledge and skills to take them forward. (I’ve said before and will say again: there is so much talent in Uplands!)

So Jane found no shortage of people interested in ideas like:
– Cleaning and greening the back lanes
– Supporting our independent shops and businesses
– “Walking to school” campaigns
– Improving air quality
… as well as exploring whether the square could be made traffic-free.

Another person who has said, “If I had £1 for every time someone has suggested that,” is Uplands resident Ben Reynolds, who makes the much-loved monthly market a reality and also runs Swansea-based creative regeneration agency, Urban Foundry – Swansea’s first BCorp. Working together, Jane and others with similar interests (using the informal working title, “Vision for Uplands”), and Urban Foundry developed an idea which could be put in front of council officers for their professional opinion and legal advice.

Meanwhile, the ‘Vision’ participants were keen to involve others. They booked a one-off market stall for conversations with community members, and found that lots of people had great ideas for improving their local area and wanted to get involved.

They also learned about “Living Streets”, the UK charity for everyday walking and decided that the best way forward would be to set up a local “Living Streets” group, with a public email and online presence. This is nearly ready to launch.

I am delighted that Uplands is going to have a “Living Streets” group, as this will make it really easy for people with common interests to get together and share their ideas for improving the area, so that everyone can enjoy the social and health benefits of walking and being well connected with their local community.

I am also delighted that council officers have now had a thorough look at the scheme which these residents drafted up and agreed that it could work. They say it would be better, in some ways, than the road layout we have now. Crucially, they confirm it could be trialled on a temporary basis, at virtually no cost. This would really enable the community to “suck it and see”, using evidence of how it works in practice to decide whether the change should be permanent, or be abandoned.

The shoppers who stopped by the one-off market stall seemed to like the idea. So did the family I once found eating a Sunday afternoon pizza on the ground outside the CISS shop, because there was nowhere else to go. Now, with confirmation that the idea is feasible, when the Living Streets group is ready to launch they can hold a thorough public consultation. A decision can then be made about whether to proceed or not.

So, stand by for news of how to join Uplands Living Streets, and explore how to make our neighbourhood greener, cleaner and nicer! Well done to all involved for showing what residents can achieve by taking the initiative, sharing their skills and working together to propose ideas for improving our community.