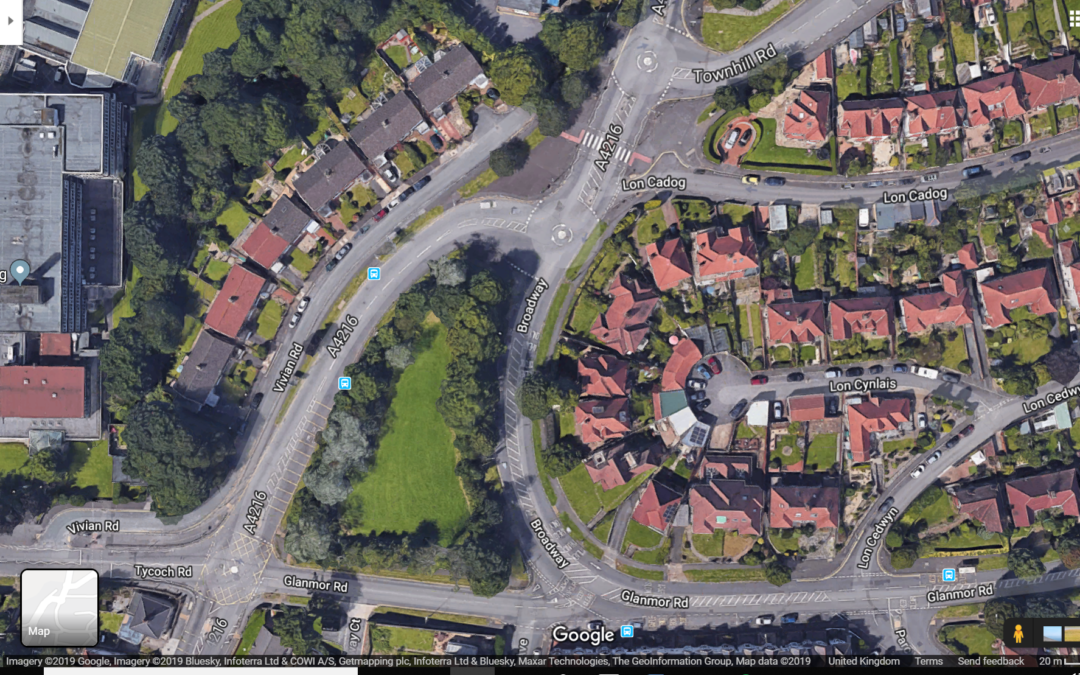 The Broadway junction has been an area of known traffic congestion for many years.  Being such a key route for schools and colleges, the afternoon build up typically starts around 3pm on term time weekdays, creating problems for everyone, particularly those who rely on buses which get caught up in the queues and severely delayed.  A new scheme, replacing the roundabout system with traffic lights, was publicised by council officers and immediately raised concern.  We councillors were as surprised as everyone else.

A number of criticism and questions arose:

We have discussed the scheme with the cabinet member and with officers, who explained the following.

1 – Lack of community involvement in the design
Funding for road improvements is very tricky and often a case of waiting for the right moment.  At various points Welsh Government may make some funds available for schemes that meet their objectives, and we have to have plans ready.  At any time there are dozens of draft schemes like this waiting around, hoping to get funded one day.  Some never do.  This particular junction has been an accident spot and congestion problem for years and the scheme was drafted around 2014/15.  Officers hoped that eventually, compulsory contributions from housing developers would pay for it – but then Welsh government surprised them by offering funding this year, at very short notice.  It must be spent by March.  It would be very difficult to involve residents in planning road layouts that might never happen, or might happen years down the line when they’ve moved away and new folks say, “Why weren’t we involved?”  But even a hasty consultation can lead to residents having their say and improving the plans, which has definitely happened here – see below!

2 – Replacing roundabouts with lights
Roundabouts seem to keep traffic moving, but it moves very slowly, and when full, drivers must wait.  Generally, about 1400 cars an hour can pass through a roundabout that isn’t already congested.  Traffic lights do force people to stop and wait, but nevertheless direct more cars, more quickly, than a roundabout: 1800 per hour, per lane.  Roundabouts generally have fewer crashes, but double roundabouts are more problematic.  There isn’t enough space here to install one large roundabout, and roundabouts are very unsafe for bikes – more on this below. The new lights would be “smart” – able to detect traffic queues and adjust timings.  This has been very beneficial in other parts of Swansea.  Finally, roundabouts can be dominated by traffic going in one major direction, creating queues for everyone else.  The scheme hopes to resolve this.

3 – Pandering to cars vs people who cycle and walk
Roundabouts are accident hot-spots for cyclists.  People in cars are concentrating on other cars and don’t see them.  The intention is for improved cycle routes to be created here – a major new cycle lane up Cockett Rd is planned, which this junction needs to incorporate.  People who cycle and walk have successfully campaigned, with our support, for improved routes through the Townhill campus development; they deserve consideration in surrounding road layouts too.   Students and teacher at the nearby college, in particular, complain often of the lack of facilities for pedestrians.  Children in the neighbourhood who cycle and walk need to grow up feeling that this is a logical travel choice, not put off by this busy junction, with its single poorly-placed zebra crossing, which is totally dominated by cars.  Traffic lights with cycling priorities and pedestrian crossings will help a lot.  Plus the car queues will reduce.  The queue down Glanmor Rd can reach to the Post Office.  The new scheme expects to see the queue end near Lon Cedwyn at peak time.

4 – No Right Turn from Townhill Rd to Cockett Rd
Following consultation, council officers understood this would be really problematic.  The scheme has now been redesigned to ADD a right-turn lane here.

5 – Left Turn Only from Lon Cadog
Monitoring and surveys show that at peak time, about 6 cars per hour want to do anything other than turn left here: a tiny proportion.  However, we have made sure officers understand the importance of this flexibility for residents here, and they are looking at what can be done. They had initially thought people on Lon Cadog could turn around, but we have explained how difficult and unachievable this is.  There are one or two other suggestions being discussed.

6 – Losing Trees?
Plans to create a wider a walkway (and potential cycle path) might have resulted in a few trees, close to the roundabouts, being lost. This was a very unpopular suggestion – remember that the cabinet member, Cllr Mark Thomas, led on the prosecution of developers who illegally cut down protected trees in Penllergaer, and he insisted another solution be found.  Trees are so important to filter air, dampen road noise and improve the area for residents.  A slight change is being made to avoid removing any trees.

The scheme is not a response to an anticipated increase in traffic – it aims to improve Swansea for people who live and work here now.  The roadworks themselves will of course be troublesome, but the council is actively seeking a contractor who will demonstrate how they will reduce inconvenience to residents and keep them well informed.  The generous width of the roads should hopefully mean that no closures are necessary, and certainly there should be no diversions through the Lons.